Top Things to Do in Haida Gwaii – Canada

Top Things to do in Haida Gwaii, Canada

This is Canada’s top travel secret and those who have discovered it will tell you that it ranks not just in the top experiences in Canada but one of their favorite places they have been! The remote islands of Haida Gwaii also known as the Queen Charlotte Islands are coveted for their natural beauty, pristine nature, abundant wildlife, and indigenous Haida History. Hike through ancient growth forests, kayak amongst whales and discover an intriguing culture in which folklore can be found across the islands. This is Canada’s best-kept secret and here are the top things to do in Haida Gwaii.

Getting to Haida Gwaii

There is no way around it, Haida Gwaii is remote and considerably difficult to get to. The easiest way is a pricey flight from Vancouver, British Columbia. If you want the real experience of getting to Haida Gwaii then do as the locals do and hop on one of the BC Ferries from Prince Rupert.

Prince Rupert is the gateway to Haida Gwaii, it is a small city with plenty to see and is well worth a visit. You can either fly from many places in Canada or take the long two-day drive from either Calgary or Vancouver to get to Prince Rupert. I drove from Calgary which goes through Banff and Jasper National Park, these two parks added to your itinerary create a lifetime trip through Western Canada and I highly recommend it.

Just passed the small settlement of Tlell is the trailhead to the Pesuta Shipwreck. The trail starts off following a black river until it meets the ocean along a massive windy white sand beach. While hiking along the river I even found a beached shark!

From the beach, you can already see the massive mysterious Pesuta Shipwreck. It another thirty minutes through the sand, but well worth it!

Tow Hill is one of my favorite places in all of Haida Gwaii, it’s teeming with Haida folklore including one story of a giant spider who used to eat travelers to the hill! Tow Hill has multiple easy trails that lead through plenty of old-growth forests covered in thick vibrant green moss. Near the top of the hill, you get outstanding views overall North Beach Haida Gwaii!

Tow Hill is located right beside North Beach which reaches to the furthest tip of Haida Gwaii. A stroll along the beach you will find plenty of crabs and keep an eye out for eagles!

Although the Golden Spruce Trail is not much of a hike its more for the old-growth massive trees and the historic location of the Golden Spruce. The Golden Spruce was a large sacred cedar tree that was revered by the local Haida population. It was a very rare tree, many say the only of its kind, but it was cut down by an eco-terrorist in response to recent logging.

Located right near Queen Charlotte is a short trail leading up to a couple of eerie forested lakes. Surrounding the lakes are towering dead trees giving the area a unique feel. It’s a beautiful place and you stand a very good chance to see wildlife such as porcupines, eagles and even bears!

Along the Alliford Bay to Sandspit road are a few hiking trails well worth the effort! This is where I saw the most wildlife! The trails follow along densely forested river trails covered in green ferns. Haida Gwaii’s black bears which are the biggest in the world can be seen in abundance here!

Located right near Queen Charlotte – Haida Gwaii Ferry is the pride of the center point of Haida Culture, the Haida Gwaii Heritage Centre. This fascinating museum and cultural center are where you can find some of the largest and most beautiful intact totem poles. You can also find incredible art, mysterious folkloric stories, and information from all corners of the islands.

Queen Charlotte is the main town in all Haida Gwaii, this is where settlers came and built their new homes. The historic small downtown is worth a stroll down to the harbor to see the local fishing boats. There are also a few cafes where you can laze around after a long hiking or kayaking trip!

Skidegate is set amidst a beautiful bay and where you will find some of the best Haida art in all Haida Gwaii! Just look for signs saying “Haida Art Shop” and head on inside to see the local galleries.

Old Masset is packed full of Haida art galleries of the higher end of quality (price too!). You can find many new and old totem poles here and it is not uncommon to see a freshly hunted deer hanging in front of a house! This is the real Haida Gwaii.

South of Sandspit, you enter the top sight of Haida Gwaii, the protected Gwaii Haanas National Park. Here the modern world disappears, and nature takes over. It is one of the most pristine and natural places on the planet! It’s not uncommon to see all kinds of marine and forest life amongst some of the oldest growth forests on earth.

Recently reconstructed after being destroyed by an earthquake is the hot springs island of Gwaii Haanas. These natural pools provide kayakers and explorers a place to soak in the hot water whilst watching whales spout in the bay in front.

Windy Bay – Hlk’yah G̱awG̱a is the location of where the Haida blockaded the government from logging and created Gwaii Haanas National park! In memory of this historic, even the Haida created a stunning totem pole and a shaman house where travelers can stay. Local watchmen provide small tours here and walk through the old-growth forests.

On this remote island, you will find the decaying village of Tanu. It’s one of the largest Haida Villages and even to this day, you can see faces of the totem poles sticking out from beneath the thick green moss. There are many house pits where multi-level wood longhouses once stood.

Skedans is the closest sight to Sandspit and one of the best-preserved Haida Villages. There are tons of totem poles still standing many of which come with tales told by the local Haida watchmen. This was a special sight in Haida Gwaii for me as the stories told stuck with me long after I left!

Without a doubt, the best way to see Haida Gwaii and Gwaii Haanas is by kayaking! The number one company on the island called Green Coast Kayaking is now pioneering Kayak tours to some of the most remote and beautiful corners of the island. While kayaking its not uncommon to have whales emerge from the depths right next to you and see bears along the island shores!

With Green Coast, all kayak trips include fishing lessons in the traditional Haida fishing method of a stick with string. It sounds hard but the fishing is so plentiful it’s easy to catch one! There are also outfits that provide professional fishing, but I recommend the kayaking excursion!

Across Haida Gwaii, you will find plenty of campsites. Sleeping beneath the behemoth old-growth forests is a special experience and I will tell any Haida Gwaii bound travelers to spend the majority of their time camping while here.

The best campsites are in Tlell, Old Masset and of course Gwaii Haanas!

Haida Gwaii is remote and getting around to see the historic sights of Gwaii Haanas is very difficult. Green Coast didn’t just get me to see these amazing places, but brought me in touch with nature using a kayak as transport. Green Coast is highly organized and was easily the best experience I had in all of Haida Gwaii. Send me a message if you are interested as I will be heading back this coming summer with Green Coast Kayaking! You can see more of Green Coast Kayaking Tours HERE 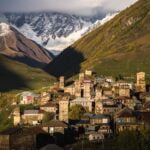